We are all familiar with the story of Cinderella. How a poor girl met her fairy godmother who then cast some spells changing her rags into a beautiful gown complete with glass slippers, mice into horses, lizards into footman, a rat into a coachman and “POOF” a pumpkin to carriage. All to be undone when the clock rang midnight. That story might be more believable than what the Firearms Technology Industry Services Branch (FTISB) is writing these days.

It seems that a new determination letter from FTISB is making the rounds on the internet. This one is dated November 10th and is surprisingly only surfacing now. In this letter, the writer inquires as to “Will it be lawful, without a Form 1, to build an AR Pistol of any such caliber with a SIG brace, a Noveske flash suppressor, and a MagPul Angled Forward Grip, from a lower receiver marked as ‘OTHER’?” 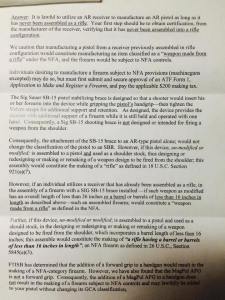 FTISB writes a brief paragraph related to the SIG Brace, its design and that it was “not designed or intended for firing a weapon from the shoulder.” In the next paragraph, FTISB states that the attachment of the brace to an AR pistol would not change the classification to a SBR. It goes on to say that, “if this device, un-modified or modified; is assembled to a pistol and used as a shoulder stock, thus designing or redesigning or making or remaking of a weapon design to be fired from the shoulder; this assembly would constitute the making of a “rifle” as defined in 18 U.S.C. Section 921(a)(7).”

FTISB continues “if this device, un-modified or modified; is assembled to a pistol and used as a should stock, in the designing or redesigning or making or remaking of a weapon designed to be fired from the shoulder, which incorporates a barrel length of less than 16 inches; this assemble would constitute the making of “a rifle having a barrel or barrels of less than 16 inches in length”; an NFA firearm as defined in 26 U.S.C., Section 5845(a)(3).” (All misspellings are that of FTISB).

It seems as though FTISB is now playing logic games in an attempt to classify legal objects and their uses as NFA items. Let’s take a look at their determination and how it is logically flawed.

FTISB correctly finds that the SIG Brace is NOT designed or intended for firing a weapon from the shoulder. In its original determination letter, the Firearms Technology Branch (FTB) found that the brace when attached to a firearm did not convert it to be fired from the shoulder and would not alter the classification of the firearm.

FTISB says the same thing in the beginning of this new determination but goes on to say that if it is USED as a shoulder stock the classification changes. We are left to extrapolate that FTISB arrives at this conclusion because the user must have designed or redesigned or made or remade the firearm to be fired from the shoulder. Of course, they are careful to not acknowledge where that act actually occurs which poses all kinds of issues.

But did the end user actually design or redesign or make or remake the firearm by shouldering a firearm equipped with the SIG Brace? I think not. NFA defines the term “make” for us.

“Make.—The term “make”, and the various derivatives of such word, shall include manufacturing (other than by one qualified to engage in such a business under this chapter), putting together, altering, any combination of these, or otherwise producing a firearm.” 26 U.S.C. § 5845(i)

The logical problem that ATF can’t overcome in their warped perception of reality is that the firearm was already made prior to it being shouldered. It was already manufactured, put together, altered and/or produced prior to an individual picking it up and placing the brace against their shoulder. And herein lies the problem that ATF can’t reconcile with their determination letters.

Unfortunately for them, NFA doesn’t quite agree with that interpretation. The law is quite clear as to what constitutes the making of a firearm. And it seems that ATF willfully neglected to include an important tidbit when it defined a “rifle” in the determination letter. A rifle is only a rifle if it was “intended to be fired from the shoulder”. 18 U.S.C. §921(a)(7).

So then we are left with the hypothetical I posed in my last blog post. If an individual makes a pistol using the brace, fires it as intended and then hands it to a friend who shoulders it, is it an illegal SBR? Let’s take it a step further, if it is an illegal SBR at that moment, after the friend returns it to the owner and the owner shoots it as intended, did it revert back to an unregulated pistol? Or does it fall into the once an NFA item always an NFA item (unless removed from the registry) category?

9 thoughts on “Cinderella and ATF’s Determination: The Fairy Tale of an AR Pistol to SBR through Magic”