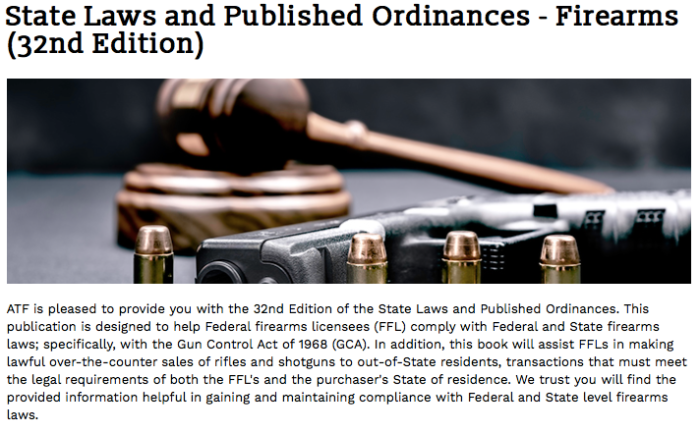 ATF has published its long overdue update to the State Laws and Published Ordinances. The publication was announced to retailers who attended the NICS Retailer Day held at FBI’s Criminal Justice Information Center this past Monday.

Prior to the publication of this edition, ATF had violated its own regulations by consistently failing to “annually revise and furnish Federal firearms licensees with a compilation of State laws and published ordinances” since 2011. Had a licensee failed to do something the regulations required them to do for a period of 6 years, they would have almost certainly been found to have “willfully” violated the Gun Control Act.

The newest edition provides licensees and individuals with information that is current through January 2017. If a state has passed a new law since, it will not be reflected in this edition of the publication.

Rather than publishing a large .pdf file, ATF opted to break each state into its own chapter. At the beginning of each state’s laws and ordinances, there is contact information for the ATF Field Division and State’s Attorney General.

The message from Acting Director Thomas Brandon does cause some concern.

Interpretation of a State or local law or ordinance:  Contact your State police, local law enforcement authority, or your State Attorney General’s office.

Anyone who has ever contacted law enforcement for the interpretation of laws knows that the police officers are not always correct in their interpretation of the law, as they are charged with enforcement rather than interpretation of it. However, the website, immediately under Mr. Brandon’s message, states “If you have any questions regarding State, County or local laws, please contact your state’s Attorney General.”

It’s nice to see ATF following their own regulations after a 6 year lapse in compliance.

2 thoughts on “After 5 Years of Violating Its Own Regulations, ATF Publishes State Laws and Published Ordinances – Firearms (32nd Edition)”