Over the past few weeks the internet has been on fire with articles, comments, petitions and information relating to ATF’s removal of SS109/M855’s (commonly known as “green tip”) exemption from being classified as armor piercing ammunition. This information came to light in ATF’s proposed framework to determine whether a projectile is “primarily intended for sporting purposes” in order to gain an exemption from being classified as armor piercing under 18 U.S.C. § 921(a)(17)(C).

While the removal of the green tip exemption has dominated conversations, individuals seem to be missing the broader implications of the proposed framework, which might be exactly what ATF was trying to do. Now, I’m not proposing that ATF is trying to be insidious, but given their track record with Operation Fast and Furious and about 87 other things, I wouldn’t necessarily put it past them.

At this point, if you are reading this and have not submitted a comment, I encourage you to do so. The information for how to submit one will be at the bottom of this post. 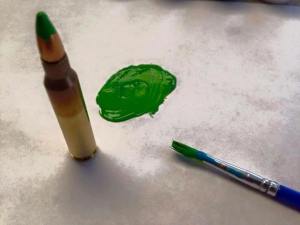 (i) a projectile or projectile core which may be used in a handgun and which is constructed entirely (excluding the presence of traces of other substances) from one or a combination of tungsten alloys, steel, iron, brass, bronze, beryllium copper, or depleted uranium; or

(ii) a full jacketed projectile larger than .22 caliber designed and intended for use in a handgun and whose jacket has a weight of more than 25 percent of the total weight of the projectile.

The proposed framework for analyzing whether a projectile should be granted a “primarily intended for sporting purposes” exemption has two tests.

Category I: .22 Caliber Projectiles
A .22 caliber projectile that otherwise would be classified as armor piercing ammunition under 18 U.S.C. 921(a)(17)(B) will be considered to be “primarily intended to be used for sporting purposes” under section 921(a)(17)(C) if the projectile weighs 40 grains or less AND is loaded into a rimfire cartridge.

Category II: All Other Caliber Projectiles
Except as provided in Category I (.22 caliber rimfire), projectiles that otherwise would be classified as armor piercing ammunition will be presumed to be “primarily intended to be used for sporting purposes” under section 921(a)(17)(C) if the projectile is loaded into a cartridge for which the only handgun that is readily available in the ordinary channels of commercial trade is a single shot handgun. ATF nevertheless retains the discretion to deny any application for a “sporting purposes” exemption if substantial evidence exists that the ammunition is not primarily intended for such purposes.
The term “single shot handgun” means a break-open or bolt action handgun that can accept only a single cartridge manually, and does not accept or use a magazine or other ammunition feeding device. The term does not include a pocket pistol or derringer-type firearm.

It would seem that ATF is proposing, if the projectile is by definition armor piercing, designed for .22 caliber, weighs more than 40 grains AND is loaded into a centerfire cartridge, the projectile will not be granted an exemption. Even more troublesome, is that ANY projectile, which by definition would be armor piercing, that is not .22 caliber, will not be granted an exemption unless it is loaded into a cartridge for which the only handgun that is readily available in the ordinary channels of commercial trade is a single shot handgun.

These two categories fall short of providing for the exemptions that the firearms community needs. As the EPA and states crack down on lead in projectiles for “environmental reasons”, manufactures and individuals are forced to look at other materials. Brass, an inexpensive metal and good material for hunting projectiles, is one of the enumerated metals in Section 921(a)(17)(B). The implications of this proposed framework being enacted are far reaching.

In the proposed framework, ATF states an exemption was granted in 1986 to SS109/M855 “green tip” ammunition. ATF quotes language in this exemption which was granted, yet did not provide the public with a copy to reference. ATF cites the determination saying

‘…it is well documented’ that the respective ammunition ‘has been recognized as being suitable for target shooting with rifles due to its accuracy.’

ATF then proclaims that when assembled into a complete cartridge, the projectiles were exempt, but ATF did not exempt the projectiles before the cartridges were assembled. The framework continues stating that in applying the proposed framework, the green tip ammunition does not fit into the exemption any longer as it may be used in a handgun other than a single-shot handgun.

There has been much discussion about this “letter” but no one has been able to produce a copy, until now. After a lot of searching and leads given to me by some friends in the industry I was able to obtain a copy of the original determination letter that ATF issued granting the exemption to SS109/M855.

In the letter, ATF reviews the definition of armor piercing, which at the time was

The term armor piercing ammunition means a projectile or projectile core which may be used in a handgun and which is constructed entirely (excluding the presence of traces of other substances) from one or a combination of tungsten alloys, steel, iron, brass, bronze, beryllium copper, or depleted uranium. Such term does not include … a projectile which the Secretary finds is primarily intended to be used for sporting purposes…

ATF goes on to say

Examination of the SS109 (M855 Ball) ammunition indicates that the projectile is constructed using a full metal jacket and projectile cores constructed of a steel penetrator located forward of a lead core. Based on its construction, the SS109/ M855 projectile meets the above definition of armor piercing ammunition.

Wait, did ATF just say that the projectile is constructed of two cores, one being a steel penetrator and the other being lead? It sure sounds that way. But referring back to the statute their reading doesn’t quite comport with the statutory definition.

As I’ve been contending all along, ATF never had the authority to grant an exemption to SS109/M855 as it never met the statutory criteria to be armor piercing!

Let’s examine the statutory definition of armor piercing by breaking it down and applying it to SS109/M855. First, the statute regulates a projectile or projectile core. So far, it’s applicable.

Second, the statute requires that the projectile or projectile core may be used in a handgun. Again, applicable as there were handguns during the mid 80’s which could fire a .223/5.56 cartridge.

Third, the statute requires the projectile or projectile core be constructed entirely from one or a combination of a list of enumerated materials, steel being one of them. And this is where ATF failed to understand plain English.

The steel penetrator found in SS109/M855 is not the core. Since ATF developed an affinity for utilizing dictionaries in order to define terms, I think it is only proper I do the same.

Dictionary.com defines “core” as a noun meaning “the central, innermost, or most essential part of anything.”

As the makeup of SS109/M855 has been examined by numerous posters online, it is hardly fair to characterize the steel penetrator, which weighs a scant 10 grains, the core. Especially when compared to the lead portion of the projectile which weighs 32 grains. The remaining 20 grains come from the copper jacket, which given its relative position, could not conceivably be argued to be the core.

It would seem readily apparent that ATF had no authority to grant an exemption to SS109/M855 ammunition as it was never armor piercing by definition.

Want to get involved? There is still time. Submit your comment by March 16, 2015. You can do so in one of three ways:

Additionally you can head on over to savem855.com and use that to send faxes to members of Congress. There are several form letters, including one I drafted, that you can utilize. Be sure that if you do, you still need to submit a comment as outlined above, as ATF will not consider any information it receives unless it is delivered in one of the three ways outlined in their proposed framework.

As always, if you liked this post, found it informative or just want to share the information with others, be sure to click the buttons below to share with your friends! If you haven’t liked Prince Law Offices or Firearms Industry Consulting Group on Facebook, be sure to do so by clicking “like” on the right hand side of the page!