Firearms Industry Consulting Group (FICG), a division of Prince Law Offices, P.C., has submitted a letter in response to South Heidelberg Township’s desire to move forward with the publication of an ordinance prohibiting the discharge of firearms in the township. 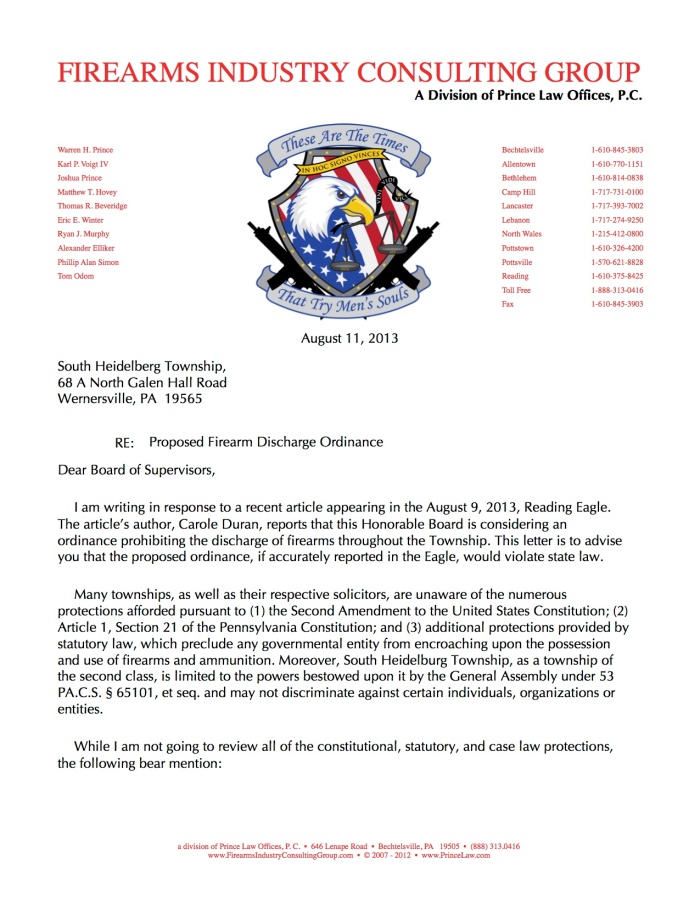 A full copy of the letter can be found here.

The background to this proposed ordinance is that on Thursday, August 8, 2013, during the Board of Supervisors meeting, the Board member, allegedly, voted 3-0 to advertise an ordinance banning the discharge of a firearm in the township. I say allegedly, because I understand the vote was actually 2-1. Nevertheless, what prompted the Board’s action was a resident’s complaint during the June meeting of a neighbors use of his own land; whereby, the neighbor fired his firearm on his own property. As Reading Eagle Reporter Duran states, “Police Commissioner James J. Girard said a township police officer asked the person who was doing the shooting to stop. After the officer left, the gunfire reportedly continued.” God forbid someone be allowed to use his/her own property, in a responsible manner.

The Board will meet on September 12, 2013, at 7PM. FICG intends to be present and voice opposition to the ordinance; however, FICG is asking everyone to attend the meeting and make your voice heard. If the Ordinance is passed, FICG welcomes any residents of South Heidelberg Township to contact us to discuss the possibility of bring suit against the Township.