Yesterday, Representative Keller introduced a bill into the Pennsylvania House of Representatives, that would repeal the unconstitutional provision found in the game code which makes it unlawful for a hunter to refuse to answer any pertinent question pertaining to the killing or wounding of any game or wildlife killed or wounded, or the disposition of the entire carcass or any part thereof. 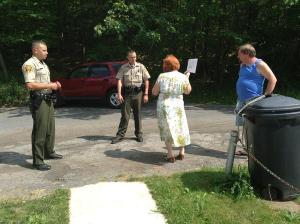 Currently, in Pennsylvania, it is a crime to invoke your Fifth Amendment rights against a Game Commission Officer in relation to the killing and wounding of any game or wildlife or the disposition of a carcass or any part of a carcass. Jack Coble spent thousands of dollars to fight against this unconstitutional provision in order to obtain relief as applied to him.

As I’ve reported previously, Game Commission Officers (GCO) will be utilizing body cameras in future encounters. As such, an individual needs to be conscious that any information they give to a GCO will likely be used against them. This is true even if there is no camera involved.

Interactions with WCO, GCO or WLCO should be treated in the same manner as an interaction with the police. You, as an individual, still retain your Fourth Amendment right to be free from unreasonable searches and seizures and your Fifth Amendment right to not incriminate yourself. As such, you should not consent to any searches, no matter what the officer offers or threatens nor should you make any statements against your self-interest.

If you have found yourself having an interaction with a GCO and were issued a citation, give us a call to discuss your options. It is not uncommon for hunters to sign a citation only to find out their license has been revoked for the next several years. The best way to prevail in challenging a citation is to give the GCO nothing to use against you.

What should you do in order to help make this bill a law? Tell your state representative to support H.B. 455 and help push to remove this unconstitutional provision from Pennsylvania’s game code!

Who is my representative?