It’s that time of year again, the NSSF Import/Export Conference which is held in Washington, D.C. While the conference is designed to help educate companies about the import/export regulations and laws they might encounter while in the business, the conference does provide for round table discussions with ATF, DDTC and other Firearm Industry officials. Some of the officials from ATF that I had the opportunity to sit around the table with were Ted Clutter (Section Chief of the NFA Branch), Earl Griffith (Head of the Firearms and Ammunition Technology Division [FATD]), Max Kingery (Second in Command at FATD) and Edward Courtney (Head of the Firearms Industry Programs Branch). 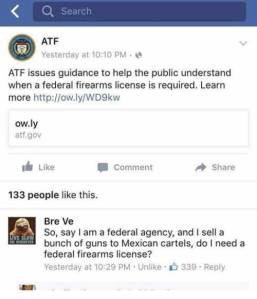 Marvin Richardson, the Deputy Assistant Director of Enforcement Programs and Services, announced during the ATF Panel Discussion that there would be a new NFA Division (discussed further below).

Andy Graham Deputy Assist Director for Industry Operations reviewed some statistics from this past year.

493 inspections occurred, 177 were related to importer applications, the rest were compliance inspections.

Alphonso Hughes chief of the Firearms & Explosives Services Division reviewed changes to the structure of different divisions of ATF.

NFA Branch has 24 examiners staffing it. It’s down from 26. There are now 4 sections within the NFA Branch. That’s up from the previous 2. There are 7 vacant examiner positions that they are in the process of filling. Projections into 2017 for additional staff to help the NFA Branch.

Krissy Carlson, the chief of the Firearms and Explosives Industry Division, reviewed the new 4473 that is up for comment (again) on the Federal Register. For more on that see Chief Counsel Joshua Prince’s blog article. They are also introducing a newsletter that they’ve been working on since November! Krissy also mentioned new rulings based on petitions submitted to them.

Andrew Lange the Division Chief of the Officer of Regulatory Affairs spoke about the difference between regulations and rulings. There are a couple of rulemaking proceedings that are in the notice and comment phase. He specifically mentioned the ATF 29P notice and comment period closing today which I filed a comment in Opposition of the Advanced Notice of Proposed Rulemaking on behalf of Dead Air Silencers. You can find that comment here.

Lastly, Earl Griffith, the Chief of the Firearms and Ammunition Technology Division, spoke. There are some promotions within the division. They are on track to do over 1,000 marking variances this year. They are taking about 2-3 weeks to process.

Processing time is advertised as 6 months. In the last 5 weeks, they received 126,000 forms on top of the 90,000 they already have. 6 months now may be 8 or 9 months. Sorry guys. Just forget you ever submitted anything.

7,500 applications a week were received before 41F was announced. It doubled after the announcement of ATF 41F. It approached 35,000 in a single week closer to ATF 41F being implemented.

Alphonso said that the non-tax paid forms should be close to a 30 day processing time. He told his examiners to make that a priority.

They are looking to implement an electronic method for the submission of tax paid forms post 41F. Alphonso mentioned the possibility of electronic submission of the application and RP questionnaires with a matching barcode sheet to mail in the fingerprints.

NFA Branch is going to become a division with several branches within it to modernize the workflow. This is due to congressional oversight inquiries. They are looking for approval on paper in the first quarter of fiscal year 2017. Actual implementation in the 2nd or 3rd quarter. Alphonso will be the Chief of the NFA Division.

I also asked the NFA Branch a number of questions during the round table discussion. Before attending the conference I asked members of AR15.com, other industry related forums, and on Facebook questions they had that they wanted answered. I received a number of good questions which I decided I would ask.

Does ATF intend to bring back eForms for Form 1 and Form 4s?

Sounds like due to funding the eForms system will just be maintained where it is, until there is funding to replace it. In other words…

Is the NFA Branch still accepting corrections to forms submitted that had “non fatal” errors?

Does the NFA Branch have any procedures in place for forms which were submitted with credit card information that was rejected for wrong numbers, when the right number was listed on the form, particularly in light ATF 41F going into effect?

Not currently. That is something I am going to follow up with ATF about. I was alerted that it would likely need to be run through the NFA Branch counsel before I received an answer.

As stated earlier, the NFA branch is again prioritizing Form 3s. They are trying to process them within 30 days (that’s the goal). There is no plan for “auto approval”.

What constitutes a “fatal error” on a form?

If you have a sample you want a determination request on prior to SHOT Show 2017, you must submit it to FATD no later than the end of September.

For those who had questions regarding why comments reflected in the docket for regulatory changes were not all displayed, I learned a few things. First, if the comment contains just vulgarity, it will not be displayed. ATF will retain it and it will likely be subject to a FOIA request, but it won’t be displayed on regulations.gov. They also may be available for viewing in the reading room.

As for the timeline for comments submitted being displayed on regulations.gov, I was told that depending how much workload they had, it could be very quick or take a while. 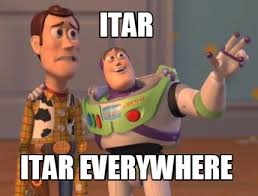