Of Arms and the Law editor David Hardy has a pending Freedom of Information Act Request against the United States. Yesterday, his attorney Stephen Stambouleih won a partial motion for summary judgment which resulted in the Department of Justice’s Office of the Inspector General having to turn over documents (note the documents themselves are from 2007).

While the revelation of the inaccuracies of the National Firearms Registration and Transfer Record (“NFRTR”) are nothing new, the documents reveal a very different perspective on the issue. OIG had taken a survey of ATF Industry Operations Inspectors (“IOIs”) on the NFRTR. Prior to IOIs conducting a compliance inspection of a FFL who has an SOT, they print off a list of the firearms the NFRTR says the dealer should have and compare it to the physical inventory. 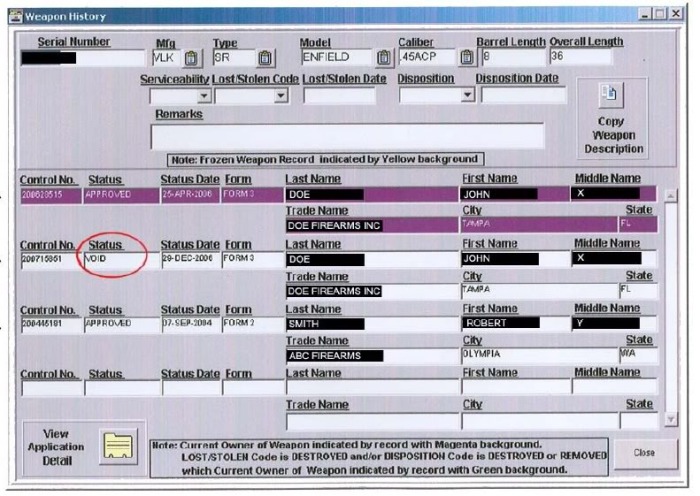 49.2% of the IOIs said that they requested an inventory report from the NFA branch one to two weeks prior to conducting an inspection. When asked how often there was a discrepancy between the report and the inventory 16.4% of the IOIs responded that it was all of the time, 30.1% said most of the time and 39.5% said some of the time.

When asked how often the discrepancy was due to the NFRTR, 10% of the IOIs responded that it was always the NFRTR, 34.4% said most of the time and 33.1% said some of the time.

While the multiple choice questions certainly draw into question the NFRTR’s validity, the open ended responses are even better.

Q12 – How do errors and discrepancies in NFRTR inventory reports affect your ability to carry out compliance inspections?

“This calls into question the accuracy of the information from the NFRTR, reflects poorly on ATF, and makes it difficult to hold FFLs accountable for correct records when the NFRTR is not held to the same standards. Often, follow-up work is required, but the records are not updated in the NFRTR.”

Interesting how the Government can maintain shoddy records and that is perfectly fine, but if a licensee makes a mistake in their record keeping, it is suddenly a “willful” violation of the Gun Control Act and puts their license at risk. Out of the 297 responses, 75 called into question the accuracy of the NFRTR.

Some other noteworthy quotes from the IOIs include:

“When I conduct an NFA inventory reconciliation, I start knowing that the NFA register will be incomplete or inaccurate.”

“Going into an inspection knowing that almost certainly there will be discrepancies, affects your confidence level initially.”

“It create a problem in that the FFL becomes frustrated that our records are incorrect, thus making ATF look bad from the onset. Yet ATF expects perfection from FFLs.”

“The FFL records appear to be more accurate than the information contained within ATF’s records.”

“In one instance, I received an NFRTR inventory report with more than 60 errors on behalf of the NFA branch.”

“I basically have to depend more on the FFL’s inventory records than on the NFA Branch.”

The NFRTR’s inaccuracies place a number of individuals at risk in varying capacities. For some it may result in the seizure of a firearm, loss of license or at worst, a felony conviction. Hopefully Mr. Hardy’s FOIA request will continue to shed light on the inaccuracies of the NFRTR.

Did you find this blog article helpful or informative? Be sure to pass it along to a friend who may benefit from the information by using the buttons below. Don’t forget to like Firearms Industry Consulting Group on Facebook by clicking the “Like” button on the right.

Don’t forget, petitions for the 2018 NRA Board of Directors are being circulated. If you would like to learn more about me and sign a petition to place me on the ballot for this year’s election visit my website: adamkraut.com.