ATF has released its annual Firearms Commerce in the United States Statistical Update for 2018. As my one friend put it, “Let the nerdery begin.” To be fair, you have to be pretty nerdy to enjoy this stuff, hence me writing about it.

The Annual Firearms Manufacturing and Exportation Report (AFMER) is only current through 2016. This is because AFMER data is not published until one year after the close of a calendar reporting year because the information provided by those whole filed a report is protected from immediate disclosure by the Trade Secrets Act. Which is why you see a two year lag (2016 data reporting in the beginning of 2017 and a year delay between its reporting and publication). 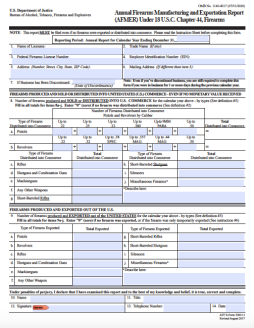 As far as NFA firearms registered by state, Texas still leads with 637,612. Florida follows with 377,2017. California (thanks Hollywood), Virginia and Pennsylvania round out the top 5. Florida leads the charge with registered machine guns, sitting at 44,484. Texas has an astonishing 265,597 registered silencers. Florida is the next closest with 98,972 registered silencers.

There are currently 55,588 licensed collectors of curios or relics, making it the most popular license type. It is followed closely by dealer in firearms, of which there are 56,638 active licenses. ATF reports 136,081 total active licenses (across the spectrum). Texas holds 10,920 of those licenses, making it the state with the most.

In 2017, 17 license applications were denied. This number is up exactly one from the year prior. As for compliance inspections, ATF performed 11,009 last year. This equates to 8.09% of all licensees in 2017 being inspected.

As always, the annual report helps give some insight as to ongoings within the firearms industry.