As our viewers are aware, Chief Counsel Joshua Prince drafted an Amicus Brief in Commonwealth v. Hicks on behalf of Members of the Pennsylvania General Assembly, Firearm Owners Against Crime (“FOAC”) and Firearms Policy Coalition (“FPC”), resulting in the Pennsylvania Supreme Court issuing a monumental decision on May 31, 2019, wherein it held, pursuant to Article 1, Section 8 of the Pennsylvania Constitution and the 4th Amendment to the U.S. Constitution, that the mere display of a firearm did not constitute reasonable suspicion of criminal activity. As the Court explicitly held that its decision was rendered pursuant to Article 1, Section 8 (in addition to the 4th Amendment) and the U.S. Supreme Court cannot overturn the PA Supreme Court’s decision regarding the Pennsylvania Constitution, it was expected that the case was over. However, we just learned that the Commonwealth has petitioned the U.S. Supreme Court for review.

The U.S. Supreme Court docket number is 19A201 and can be found here. As is the standard operating procedure for the Court upon the request of a party, on August 20, 2019, Justice Alito granted an extension of time for the Commonwealth to file its petition for certiorari. That notice was received by the PA Supreme Court today and how we became aware of the Commonwealth’s intent to appeal. 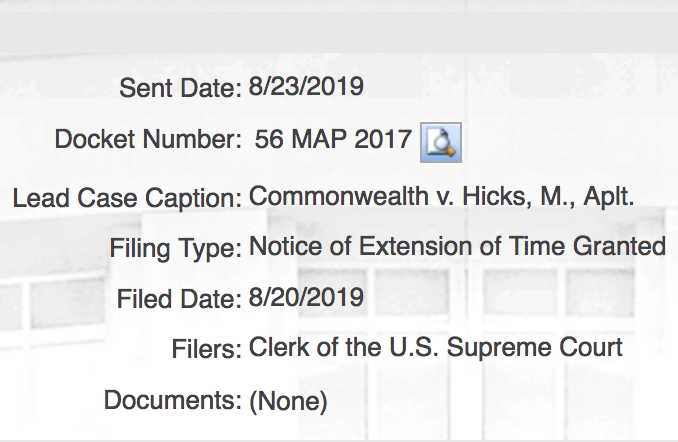 Perhaps most interestingly, although it is always possible that the U.S. Supreme Court could rule in the Commonwealth’s favor, it is extremely unlikely and based upon recent decisions, it seems very plausible that the Court could even issue a unanimous decision that the mere display of a firearm does not constitute reasonable suspicion of criminal activity. Wouldn’t that be the perfect icing on the cake?

If you or someone you know has had their constitutional rights violated by merely openly possessing a firearm, contact Firearms Industry Consulting Group today to discuss YOUR rights and legal options.

Firearms Industry Consulting Group® (FICG®) is a registered trademark and division of Civil Rights Defense Firm, P.C., with rights and permissions granted to Prince Law Offices, P.C. to use in this article.

One thought on “Commonwealth Appeals the Hicks Decision – Will SCOTUS Weigh-in on Whether Display of a Firearm Constitutes Reasonable Suspicion of Criminal Activity?”