To the surprise of most residents of Pennsylvania, it is lawful, generally speaking, to carry a firearm while voting; after all, it’s a political statement, protected under the First and Second Amendment. 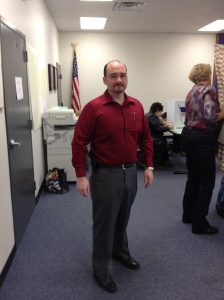 During the last election cycle, I wrote about this issue: Can You Vote While Carrying a Firearm in PA? Since that article, more and more counties (and the PA Department of State) are realizing and recognizing the lawful right of the people to vote, while carrying a firearm. Before we get into more recent instances of counties recognizing the right of the people, it is important to review the laws in relation to voting, while carrying a firearm.

No county, municipality or township may in any manner regulate the lawful ownership, possession, transfer or transportation of firearms, ammunition or ammunition components when carried or transported for purposes not prohibited by the laws of this Commonwealth.

Furthermore, pursuant to the PA Supreme Court’s decision in Commonwealth v. Hawkins, 547 Pa. 652, 657 (1997), and 18 PA.C.S. 6108, one may lawful carry openly in the Commonwealth, with the exception of the City of Philadelphia, unless the individual has a License to Carry Firearms (LTCF). In Hawkins, the Court, citing to its prior precedent in Ortiz v. Commonwealth, declared,

In all parts of Pennsylvania, persons who are licensed may carry concealed firearms. 18 Pa.C.S. § 6108. Except in Philadelphia, firearms may be carried openly without a license. See Ortiz v. Commonwealth, 545 Pa. 279, 681 A.2d 152, 155 (1996) (only in Philadelphia must a person obtain a license for carrying a firearm whether it is unconcealed or concealed; in other parts of the Commonwealth, unconcealed firearms do not require a license).

Thus, it is generally lawful to openly or conceal carry a firearm (pursuant to a valid LTCF, issued pursuant to 18 PA.C.S. 6109), as there does not exist a state law precluding such activity. However, there are several exceptions. First, if the polling location is in a court facility, an individual would be precluded from carrying at that polling location because of 18 PA.C.S. 913, which provides, “A person commits an offense if he:(1) knowingly possesses a firearm or other dangerous weapon in a court facility;” however, the law goes on to declare,

Each county shall make available at or within the building containing a court facility by July 1, 2002, lockers or similar facilities at no charge or cost for the temporary checking of firearms by persons carrying firearms under section 6106(b) or 6109 or for the checking of other dangerous weapons that are not otherwise prohibited by law. Any individual checking a firearm, dangerous weapon or an item deemed to be a dangerous weapon at a court facility must be issued a receipt. Notice of the location of the facility shall be posted as required under subsection (d).

The second issue is polling locations at schools. Pursuant to 18 PA.C.S. 912,

However, there is an defense provided for in that section, which declares,

It shall be a defense that the weapon is possessed and used in conjunction with a lawful supervised school activity or course or is possessed for other lawful purpose.

Unfortunately, “other lawful purpose” is not defined. While it is my opinion that the carrying of a firearm, pursuant to a valid LTCF for purpose of self-protection is an “other lawful purpose,” there is no case law defining “other lawful purpose.” Furthermore, voting is a lawful purpose and carrying a firearm is a political statement, pursuant to the First and Second Amendment. Therefore, it is my opinion that there are multiple bases for an individual to carry a firearm while voting on school property; however, I would not advise anyone to take a chance, as it is likely that he/she will be prosecuted for violating Section 912. If convicted, that individual would lose his/her firearm rights for the remainder of his/her life, unless the conviction was overturned or they were able to obtain some form of relief, such as an expungement or pardon.

In 2007, Mr. Gregory Rotz, openly carried his firearm while voting, and as a result, the Franklin County Sheriff’s Department revoked his LTCF. By Order dated January 8, 2008, Franklin County Judge John Waller found that no law had been broken and directed that his LTCF be returned to him.

The Pennsylvania Uniform Firearms Act does not allow county boards of election to enact resolutions or any other rules and regulations prohibiting firearms from polling places.

However, even after the issuance of that letter, I became involved in a situation in Northampton County in 2012, where an individual was temporarily precluded from voting, while lawfully openly carrying a firearm. As a result of an amicable resolution of the matter, Northampton County has now placed on its website, http://www.northamptoncounty.org/northampton/cwp/view.asp?a=1533&Q=621057&northamptonNav=|34800|&northamptonNav_GID=1988. Furthermore, additional safeguards have been implemented in Northampton County, including, but not limited to, poll worker training and providing a copy of the policy to any Common Pleas Judge presiding over Election Court on Election Day.

If you, a family member or someone you know is precluding from voting, while carrying a firearm, contact me immediately, so that we can discuss your options. We cannot let our Rights be eroded by ignorance.

8 thoughts on “Voting While Carrying a Firearm in PA – It’s Legal!”