It figures that I’d be sitting at my computer browsing Facebook on New Years Eve and stumble across a post from Thordsen Customs, which stated that they received a determination letter from ATF regarding their custom buffer tube covers and CAA Saddles, which was posted 4 hours before midnight…Happy New Years Eve!

It seems that Thordsen requested some clarification to its design as it had been recently redesigned. The letter was submitted back at the beginning of October and the reply was from the 18th of December, which Thordsen states they received on the 23rd. In fact, Thordsen has published their thoughts on the letter along with the original response from ATF on their website after having taken the time to review it. You can view their thoughts here.

In the determination request letter, Thordsen asked ATF to examine three different samples. They asked if their buffer tube covers with the saddles allowed the AR pistol to retain its classification as a “pistol”, when utilizing their spacers to accommodate people of varying statures and whether the use of a receiver extension (buffer tube) with their cover and a side saddle, for the purpose of providing a stable cheek weld and safer handling, was permissible on a pistol variant that does not require a receiver extension to function.

Letter to ATF from Thordsen Customs

Firearms Technology Industry Services Branch (FTISB) begins its response by defining the terms “handgun”, “pistol”, “rifle” and “firearm”. FTISB notes that their focus is to determine whether the items constitute a “firearm” as defined in the Gun Control Act of 1968 (GCA) or the National Firearms Act of 1934 (NFA).

The response notates that a shoulder stock provides a means to support a firearm and easily aim it.

Finding that the submitted samples were designed to enhance a “cheek weld” of an AR type shoulder stock or pistol buffer tube, FTISB correctly determines that none of the items submitted were “firearms” as defined by the GCA.

The letter continues on to state that “FTISB finds that the submitted saddle devices are not designed to support the AR-type pistol in the shoulder of the shooter during firing but, rather, to rest against the shooter’s cheek.” As such, FTISB correctly finds that the attachment of the saddle to an AR type pistol does not change the classification of a pistol to a SBR. FTISB notes “…as long as the saddle device as evaluated and installed to an AR-type pistol, is not designed or redesigned and intended to contact the shoulder and is not used as a shoulder stock, it’s possession and use would not be prohibited.” (Emphasis added).

FTISB then explains that [t]he receiver extension/buffer tube on an AR-type pistol serves a legitimate, vital function in the operation of the weapon system; and if utilized as originally designed is not considered to be a shoulder stock. Further, a pistol that has an AR-type buffer tube or similar component assembled to it, which consequently allows for the installation of a saddle/cheek enhancement accessory, is not classified as a SBR; nor unlawful to possess.”

Here is the paragraph everyone is going to want to take a long hard look at. “However, if a pistol assembled with an AR-type buffer tube or similar component; which in turn, redesigns the subject AR-type pistol to be designed or redesigned and consequently intended to be fired from the shoulder; an NFA weapon as defined in 26 U.S.C. § 5845(a)(3); has been made.”

FTISB concludes that the information in the letter is only intended for use by the addressed individual or company with regard to a specific scenario described within the correspondence, which is newly included language not previous found in any FTISB/FTB determination response.

So what happened? Well, it appears very clear that FTISB and ATF as a whole are paying very close attention to what people are doing and how they are utilizing products, including reviewing internet postings, pictures and videos. All of the stabilization/cheek enhancement products on the market have a legitimate purpose and have assumedly been approved by FTISB at some point. But, it appears that some individuals are not looking to purchase these products for their legitimate purpose and use and instead intentionally intend to misuse them from the moment they are purchased.

As was noticeably absent in the letter discussed in my blog post Cinderella and ATF’s Determination: The Fairy Tale of an AR Pistol to SBR through Magic, this letter does mention intent, in fact several times. Let’s revisit the definition of rifle under the GCA and NFA. 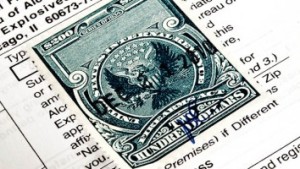 So what’s going on? Well, it seems that ATF didn’t appreciate people purchasing various stabilization products/cheek weld enhancements for the purpose of avoiding the payment of the NFA tax (which could constitute tax evasion). This is why the intent aspect, as stated in the definition, is important. If an individual purchases one of these products intending to use it in the manner for which it was made and then misuses it, as ATF previously held in the Bradley letter, he/she has done nothing illegal. There is no law dictating the end use of a product. However, if an individual purchases one of these products to install on their pistol and intends to use it as a faux stock, he/she has very clearly created an illegal SBR.

34 thoughts on “Ringing in the New Year ATF Style…”